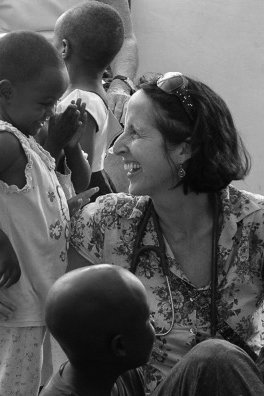 Since 2007 Dr Scanlan has been based in Tanzania supporting the National Children’s Cancer Network – the NCCN. Today Tumaini la Maisha provides support, including all chemotherapy to all children, free of charge to paediatric cancer patients at 11 sites across the country. For these children, long-term survival rates have improved from less than 10% in 2006 to more than 50% in 2021 and access to treatment has improved 7-fold in 15 years.

Over 10 years these efforts have supported the treatment of over 6000 children with cancer across the network, increased overall survival from less than 30% to approximately 50%, the number of children treated annually has more than doubled in 10 years and access to care has grown from 1 site to 9 sites (and growing) nationwide.

Dr Scanlan has survived breast cancer twice and December 2022 will mark 10 years since her firstdiagnosis. Shewasawardedtheinauguralalumniawardformedicine,byUniversityCollege Dublin in 2014 and the Kathleen Lynn award for exceptional Service on behalf of children by the Royal College of Physicians in Ireland in 2019. In May 2022 she received an honorary doctorate from the Royal College of Surgeons in Ireland for her work in Tanzania.

Helping to set up the Global Health Department at Children’s Health Ireland is a wonderful new challenge Trish is involved in as Interim director.