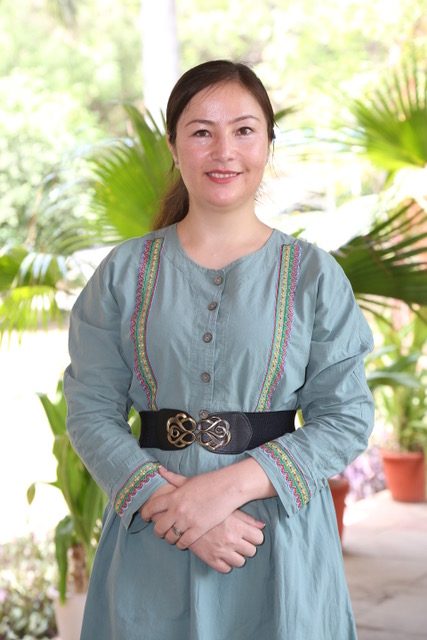 Saeida Saadat is recipient of an ICGEB Fellowship enabling her to continue her research and work towards obtaining her PhD at the Laboratories in ICGEB New Delhi.

ICGEB is awarding Fellowship grants to Scientists from Afghanistan, to support the basic human right to education, discovery, and improving lives through scientific endeavour.

Promoting human rights, leaving no one behind: equality and non-discrimination are at the heart of sustainable development.

The current political regime in Afghanistan has meant that the vibrant and promising scientific activity in the country has been brought to a complete halt.

Saeida Saadat is currently hosted at the ICGEB New Delhi Component where she is finalising her PhD studies in the Immunobiology laboratory. In a recent interview, she spoke to us of her experience, her family’s trials and, above all, of her passion to follow a scientific career.

Her aspiration is to one day return to her home country and teach science to young women at the University.

Edrees first contacted ICGEB in August 2021 and has been pursuing his research in the Tumour Virology laboratory at the ICGEB in Trieste since December.

“The Hazara community, to which I belong, is one of the minorities in Afghanistan who were vulnerable, threatened, and brutally oppressed by the Taliban before the previous hard-line regime was toppled by the US-led invasion in 2001. At the moment, Hazara scholars, artists, journalists, and other educated citizens are again targeted by the Islamic state terrorist groups and other Muslim militant groups. The public universities and girls’ high schools have been closed by the Taliban, who do not allow female employees to work or female students to go to universities and schools. Public financial services have ceased, and workers have stopped receiving their salaries, which is adding to the pressure on the country’s banking system.”

“The opportunity to undertake a Fellowship at ICGEB in Trieste, Italy has meant that I am currently safe from persecution and that I can provide subsistence to my family of nine, who are currently in hiding, as internal refugees in Afghanistan.”

“When the Taliban swept to power in August, western countries’ troops left, their financial and technical support stopped, and the world governments cut off Afghanistan’s access to international funding. In this incredible crisis, more than 90% of Afghan women and men are facing starvation and nearly the entire population is on the brink of extreme poverty. To my community, it feels like one of the greatest, recent humanitarian and economic crises.

On the occasion of Human Rights Day, 10 December 2021, ICGEB launched a campaign to raise funds for Fellowship awards for scientists from the Least Developed Countries. ICGEB laboratories are making it possible for science to continue in Afghanistan through the support provided to Afghan scientists, to increase their knowledge and extend their scientific networks, to foster international collaborations and publication in international scientific journals; building capacity for when it becomes possible for scientists in exile to repatriate.

To contribute to our efforts and to provide educational opportunities to scientists from Afghanistan in ICGEB labs in Trieste, New Delhi and Cape Town:

Article 27 of the UN Declaration of Human Rights states that: