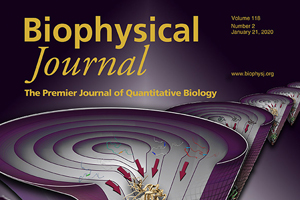 Neel Bhavesh, Group Leader, Transcriptional Regulation, ICGEB New Delhi’s recent publication on the structure of an unfolding intermediate has been published in the Biophysical Journal, with the work featuring on the cover.

“The Beautifully Orchestrated Symphony of Protein Folding within The Folding Funnel” is how the work is described on the Biophysical Society blog (an excerpt follows).

“Proteins either start folding as soon as they emerge from a ribosome as chains of amino-acid residues or require a helper molecule to fold into a well-defined three-dimensional structure, which is essential for their proper functioning. The landscape funnel of protein folding describes a protein’s journey through the crests and troughs of internal free energy and degrees of freedom to reach the folded state from the rapidly exchanging ensemble.”

“The cover image of the January 21 issue of Biophysical Journal is an artistic rendering of the folding funnel with multiple highly dynamic conformations of a domain of ETR3 protein at its top broader end, folded like intermediate states in the middle and its folded native conformation at the bottom of the funnel.”

“The cover illustration is inspired by NMR structure determination of the folded and an intermediate ensemble during the unfolding of ETR3-RRM3 protein and our characterization of residue-level dynamics of folded, intermediate and unfolded states. Through this cover image and our study, we intend to show high-resolution structural information obtained on different states along the funnel can provide detailed insight on the (un)folding mechanism.”