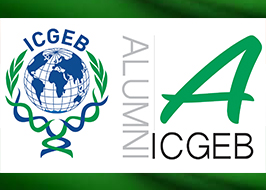 Thirty years down the line, the success and impact of the ICGEB funding programmes – CRP Grants and Fellowships – are becoming increasingly apparent.

Here we present a few of the success stories of ICGEB trained and funded scientists throughout the world. Effectively, the ever more frequent appearance of ICGEB alumni and CRP Grant recipients on the global stage are a tribute to the training and activities of the Organisation.

Noor Gammoh from Jordan joined the ICGEB in Trieste to undertake her PhD studies in the Banks’ laboratory where she investigated the oncogenic role of Human Papillomavirus-encoded proteins. “During this period (2003-2008), I had the opportunity to attend and present my findings at a number of international meetings as well as contribute to several peer-reviewed publications, three of which as first author. My experience at the ICGEB empowered me to pursue an academic career and apply for competitive positions. In 2009, I moved to New York City for my postdoctoral training at the Memorial Sloan Kettering Cancer Centre where my interest in the fields of autophagy and brain cancers was initiated. Four years later (2013), I established my own laboratory at the University of Edinburgh where I am supported by a Cancer Research UK Fellowship to pursue my research investigating the molecular biology of autophagy and its relevance in aggressive cancer models such as glioblastoma. As a group leader, I am now involved in supervising a new generation of young scientists. A PhD training is not just about obtaining a degree. It is a process of developing research skills, critical thinking, creativity, integrity and passion. My experience at the ICGEB was key to develop such attributes through direct supervision and by taking part in a collaborative and international research community enthusiastic about performing the best science.”

While attending an ICGEB sponsored workshop in Vietnam, Scientific Coordinator and Group Leader of the ICGEB Bacteriology lab in Trieste, Vittorio Venturi, met with Nguyen Bao Quoc. Ph.D. and Postdoc fellow at Kobe University in Japan performing studies in plant pathology, he moved on to Dartmouth University in the USA for a postdoc studying C. albicans and finally went back to his home country Vietnam, setting up his laboratory in the Agriculture Forestry University also thanks to an ICGEB-CRP grant. His current research interests are on rice diseases as well as identifying beneficial plant-associated bacteria involved in plant health. Dr. Nguyen Bao Quoc has stressed how pivotal the ICGEB CRP grant was in going back to Vietnam and establishing his laboratory and research agenda.

Federico Odreman is an Argentinean-Venezuelan biologist who joined the Molecular Pathology Lab in Trieste where he obtained his PhD in 2001, through the SISSA for his studies on the mechanism of translation initiation of HCV core protein depending on the IRES (Internal Ribosome Entry Site). He published 2 first-author articles in high impact international journals as a result of these studies. During his career trajectory Federico was a Postdoc in the Biochemistry Lab at Brown University, Rhode Island under the supervision of Prof. Susan Gerbi. In 2015 he moved to Mexico as Principal Scientist for a biopharmaceutical company, to supervise the activities of the research labs. Since July 2019, he serves as a Dean of the Natural Science Faculty at Icesi University in Cali, Colombia.

Having completed a Postdoctoral Fellowship in the Bacteriology lab under the supervision of Vittorio Venturi, Joseph Bigirimana returned to his native Burundi in 2007 where he set up rice-bacterial working models. He moved on to become the Dean of the Faculty of Agriculture at the University of Bujumbura, Liaison Scientist and Coordinator for the International Rice Research Institute, and has set up an IRRI-Outstation in Bujumbura, Burundi. He is a Senior Scientist in Plant Pathology and IRRI Regional Coordinator for East and Southern Africa.

PhD student in Trieste between 2006-10, Zulma published 4 first- and 2 co-author papers in high-impact journals on quorum sensing signals and bacterial plant disease during this time. Following postdoc studies at the University of Medicine & Dentistry at New Jersey, she returned to Colombia as Research Associate at the Biotech Institute, Universidad Nacional, in collaboration with Biocultivos S.A. In 2014 she joined Universidad de La Sabana as Assistant Professor and moved to a Biotech Company. Currently Director of R&D, Empresa Colombiana de Productos Veterinarios VECOL S.A., Bogota, she is Ambassador to Colombia for the American Society for Microbiology, trains at Cold Spring Harbor and other institutes and gives seminars on career development and the transition from academia to industry. “ICGEB had an enormous impact on my career; it provided an international environment rich in experimental skills and ideas, training in leadership and diplomacy of science, through life testimonials of young scientists and experienced researchers. My collaborations have developed through the ICGEB network, following the rules of respect and excellence learned in Trieste.