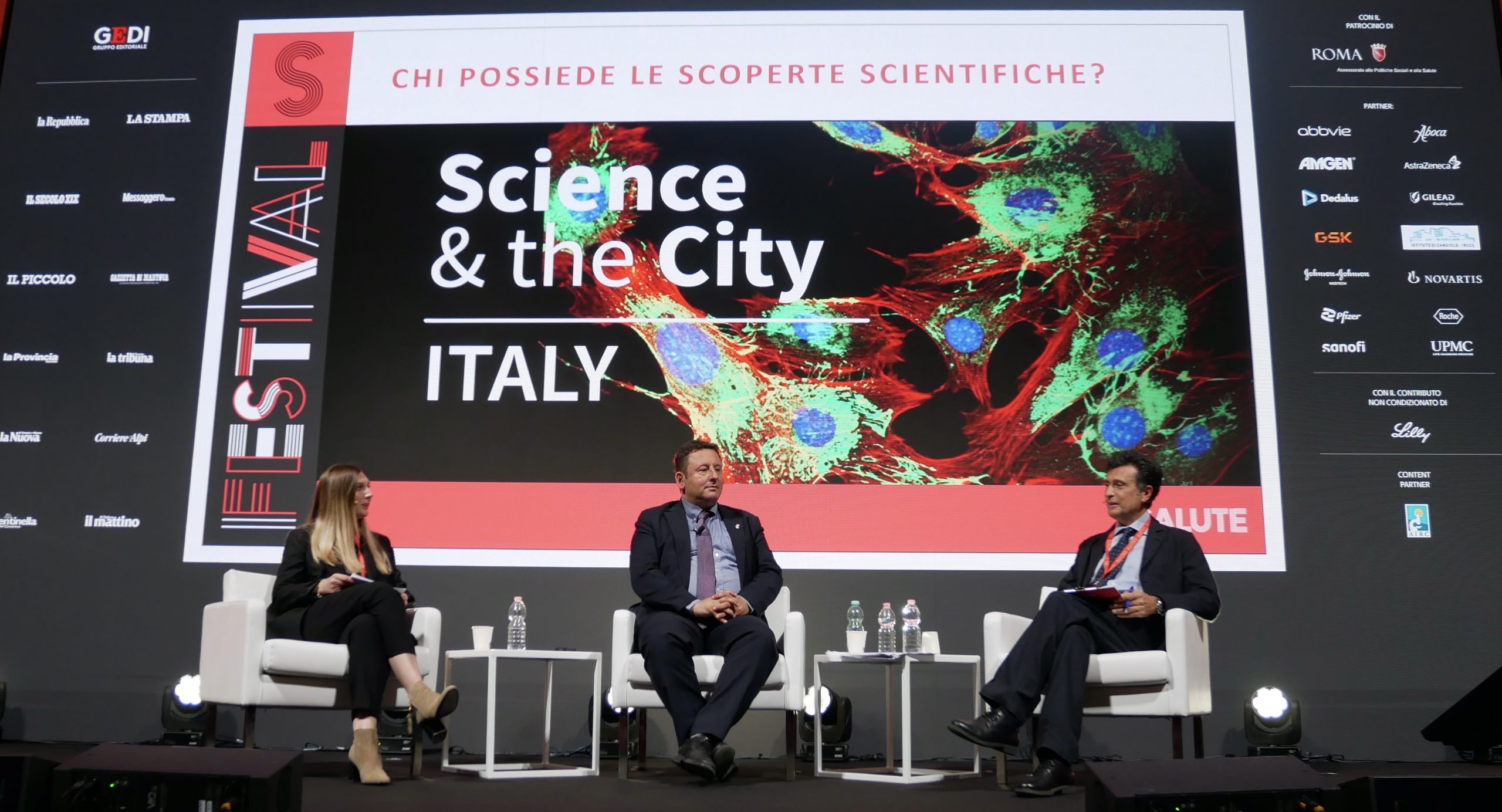 The national edition of Science & the City, organised with the support of the Italian Ministry of University and Research, and Media Partner Rai Radio 3 and Rai Regione FVG, reaches the capital.

On 20 October, 2022 at the splendid location of the Ara Pacis Museum on the bank of the River Tiber, Rome’s Festival of Health – “Festival di Salute” played host to the 6th episode of Science & the City Italy. Entitled “Who owns scientific discoveries?“ the event was in English and Italian and was part of the programme on the Future of Medicine, including events with Nobel laureate Craig Cameron Mello.

Panelists Nina Volf from ICGEB Trieste and De Simone & Partners, Rome, and Raphael Singer, Office of Economic and Scientific Affairs, Embassy of Israel in Italy, discussed patenting in the life sciences, prerequisites for obtaining patents, as well as the difficulties and obstacles involved in doing so, in a discussion moderated by Gabriele Beccaria (Politecnico di Torino, science journalist and editor of Tuttoscienze, La Stampa, and Tuttosalute, La Repubblica – two of the nation’s main newspapers, from Torino and Rome, respectively).

The Festival, which was held between 20-22 October, included more than forty talks, interviews and events on Italian medicine and healthcare.

The Science & the City Italy project has included appointments in: Parma, at the Green Week Festival, focusing on agriculture; in Bergamo, at the 20th edition of BergamoScienza; in Padova, at the Galileo Festival of Innovation, and in Trieste, at the TriesteNext festival of scientific research, focusing on health – with appointments in English gaining broad European and international exposure.

The series will close with a final event to take place in Rome, on 13 December 2022, at the International Italo-Latin American Organisation IILA, with an event focusing on clean energy and biofuels.

All events have been held live and in streaming – with links available to the podcasts.

A note on Nina Volf: “I started my scientific career as a PhD student in the Cardiovascular Biology lab in Trieste, under the supervision of Prof. Serena Zacchigna”. Explains Dr. Volf, who has developed expertise in angiogenesis, both in cancer and in the cardiovascular field, focusing on the study of new genetic tools to modify endothelial cell biology using viral vectors, with the aim to enhance viral vector-mediated gene delivery. “My passion for science and curiosity for innovation have led to a traineeship as a patent consultant in the life sciences sector at the legal practice De Simone & Partners in Rome.” Dr. Volf recounts that her interest in Intellectual Property was sparked by work on multiple projects in the cardiovascular field and in gene therapy that went beyond research and involved liaising with the technology transfer office.

ICGEB Science & the City is a series of public conferences on hot topics in Science launched and developed by the ICGEB to help narrow the gap between science and society. Events provide an opportunity to the public to engage with scientists and science and, likewise, for scientists to hone communication skills to contribute to a vibrant scientific community and disseminate knowledge, truth and enthusiasm for science: concepts that are integral to the mission of the ICGEB.