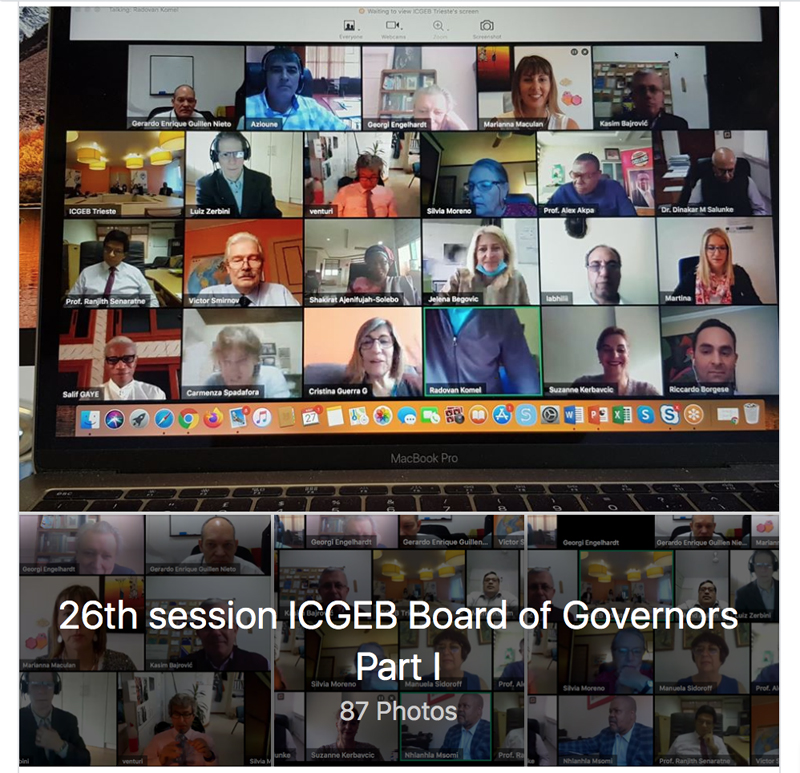 The Opening session of the 26th Board of Governors was held online, on Wednesday, 27 May 2020, with Representatives from the Governments of 42 ICGEB Member States in attendance.

The session was opened by the Director-General, Lawrence Banks, and the President of the Board, Mr. Victor Smirnov, the Governor from Russia. The Agenda of the day was the approval of the General Programme and Budget of the ICGEB for the year 2020, including the revenues, expenditures, and the Five-Year Work Programme of the Organisation.

In attendance, the Governor of Italy, Minister Fabrizio Nicoletti, who addressed the Board and confirmed his Government’s intention to do its utmost to continue to support ICGEB’s core business, its activities on the African Continent and the Global South and the effectiveness of scientific collaboration world-wide. He also commended the ICGEB on its response in relation to the Covid-19 pandemic and its achievement in sequencing the full genome of the virus in Trieste in early March.

The Governors from the Host Countries of India, Dr. Mohd Aslam, and of South Africa, Dr. Nhlanhla Msomi, were also present, and, attending the Board for the first time, the new Governors from Brazil, Colombia, Hungary, Kenya, Sri Lanka, and Sudan.

The Board of Governors approved the regular budget of the Centre, as also substantiated by 46 written approvals from Member State Governors, which had been received prior to the meeting.

Dr. Banks reported on the CSA virtual meeting held on 21 April 2020, during which twelve (of the fifteen) members had been present, to endorse the 2020 General Programme and Budget.

Efforts being made by the ICGEB to favour the extramural programmes were strongly supported, in particular by the Latin American and Asian members, including Peru, Panama, China, and Pakistan, as was the initiative put forward by the President of the Board for the BRICS’ countries to fund projects to tackle Covid-19.

The Governors expressed appreciation for the effort made by the ICGEB in general, and the Molecular Virology lab in particular, for the work on Covid-19, and for the ICGEB Covid-19 Web Resources page.

The Chief of External Relations, Secretary of the Board, Marianna Maculan, confirmed that engagement with Member States is increasing and that ICGEB stands ready to do more to be of service to its constituency. The Director-General thanked the President, and the entire Board, for their collective work in the name of Science for Development.