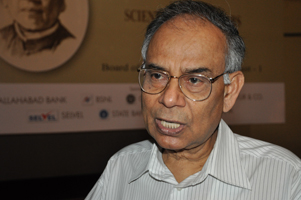 Ananda Chakrabarty, Distinguished University Professor, the Department of Microbiology and Immunology, University of Illinois at Chicago, passed on 10 July 2020.

A pioneer in the field of Intellectual Property, he was recipient of the first-ever patent for a living organism – the Pseudomonas putida. The “oil-eating bacteria”, capable of breaking down crude oil for treating oil spills. His patent on GMO bacteria in 1981 sparked a biotech revolution after it was found that “Patent protection is available for a micro-organism that is artificially constructed rather than naturally occurring.“

Dr. Dinakar Salunke, Director, ICGEB New Delhi states “Dr. Ananda Chakrabarty was a renowned microbiologist known for his first patent for a recombinant microbe and recent notable works with water-soluble products of pathogenic bacteria demonstrating significant promise for cancer therapies, effective against HIV/AIDS, malaria and perhaps even tuberculosis. His life exemplifies an aptitude for turning research into practical means. For his achievements in genetic engineering technology, he was awarded the prestigious civilian award ‘Padma Shri’ by the government of India in 2007. With a career spanning more than 60 years, his contributions have had a major influence on scientific research and patent system.”

Dr. Vittorio Venturi, ICGEB Scientific Coordinator, and head of the Bacteriology lab, added “Dr. Chakrabarty made important breakthroughs in genetic engineering of oil metabolising bacteria, in studying mechanisms of bacterial chronic infections in cystic fibrosis patients, and, most recently, on the role of cupredoxins and cytochromes in cancer regression. He inspired many microbiologists for his incredible curiosity and devotion to research with many of his discoveries being pivotal and that will be cited for many years to come.”