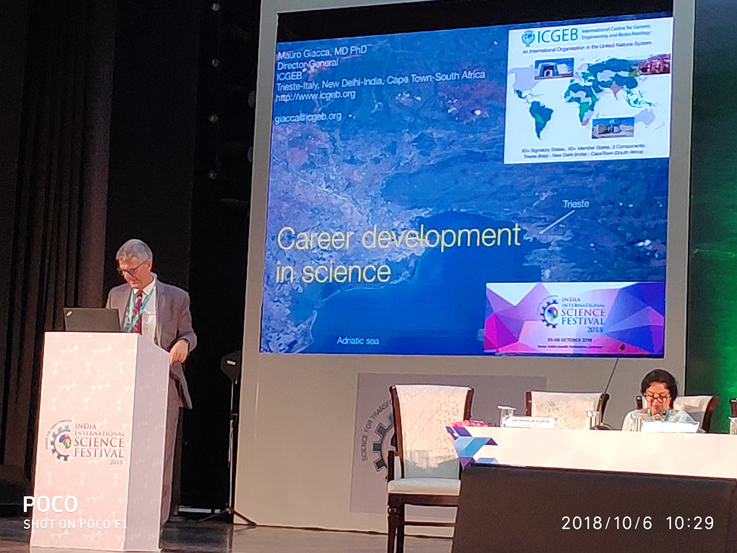 The 4th India International Science Festival 2018 (IISF 2018) was organized by Ministry of Science and Technology with other partners from 5-8 October in Lucknow, India. ICGEB New Delhi was present in force.

ICGEB Director-General, Mauro Giacca, was the main guest at the Panel discussion on the topic “Opportunities for Career Development”. His session was greatly appreciated by scientists. The focus of IISF-2018: “Science for Transformation” featured more than 20 special events. ICGEB’s scientists were invited to participate under most of the themes. Navin Khanna, Group Leader, Recombinant Gene Products Group, represented ICGEB at the Academia meets event. ICGEB’s scientific work was also displayed at Poster sessions at several events and highly appreciated amongst the science fraternity.

A Mega Science Expo was also organised as a separate event. The ICGEB stand at the EXPO witnessed huge participation by scientists, students and experts from across the country. In particular, the Science Quiz at the ICGEB stall was a great success among students. The stand was very popular and provided information to the participants about ICGEB Fellowships, Workshops and available and commercialised technologies.

IISF-2018 was attended by more than 10,000 people, with more than 22,000 registering. Two major Guinness World Records were set; one of which was a World Record for the successful attempt to “isolate DNA” by 550 students from years 8-10.

IISF 2018 was a great success and a great vehicle for the ICGEB to make participants aware of its scientific strength.