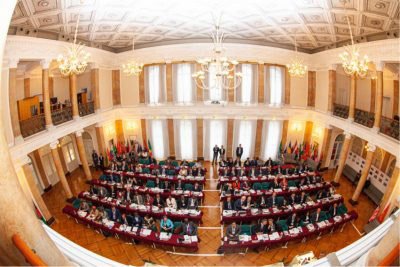 The annual Plenary Board session of the ICGEB was held online from Headquarters in Trieste, Italy, with representatives from across its Member State constituency.

While the session was originally planned as hybrid, the persistent uncertainly of the pandemic has led to the decision to hold the Board of Governors online for the second consecutive year.

Mr. Victor Smirnov, Russian Federation, President of the Board, presided live from Moscow, while the Director-General, together with the Directors from ICGEB New Delhi and ICGEB Cape Town, and other members of the Management presented the results of the last year.

Requests for membership were presented by Botswana and the Republic of the Congo, and delegates from the Member States of Brazil, Egypt, Kenya, the Republic of Moldova, and Turkey, gave presentations on ICGEB Regional Research Centre proposals underway in their countries.

Other items discussed included the recruitment of the Director of the New Delhi Component (this vacancy is now also on Nature), and the revision of the Scale of Assessment, which determines the contributions by Member States for the running of the Organisation and its activities.

The results of the Council of Scientific Advisers‘ session, held in Cape Town, South Africa in October, where the research of the Organisation was reviewed, were presented by Prof. Mariano Garcia-Blanco, Member of the Council, from the University of Texas Medical Branch, Galveston, Texas, USA.

Mr. Victor Smirnov, Governor from Russia, and Prof. Cristina Guerra-Giraldez, Governor from Peru, were re-elected as President and Vice President of the Board of Governors for the next two-year period.

Lawrence Banks, ICGEB Director-General comments: “ICGEB, like any other institution, is trying to overcome the effects of the pandemic and return to normal education and academic practices. Unfortunately, many colleagues from overseas are now wary of coming to Trieste because of concerns as to what they might find. As one of the international Organisations that is an integral part of the Trieste science system, we are disappointed by the reaction of a small minority of the population that is creating notoriety for Trieste in the international media. While the ICGEB and all the scientific institutes in Trieste, Italy, and around the globe, are working hard to rid the world of Covid, there is a portion of the general populace who seem to carry on as if it does not exist.”

“The anti-vaccination sentiment is astounding, and the international notoriety that such sentiment can instigate (such as the recent article in the New York Times) is a sad reflection of the sign of the times fuelling uninformed distrust in Science. As an international Organisation dedicated to ensuring science can deliver benefits for people all over the world we shall continue to strive to ensure that sense and reason once again take centre stage in Trieste.”

“We have bought into a digital landscape that commoditises news. It is a battle for facts. And we’re at the front line, and it has gotten far more dangerous than it has been in the past. I think the award also shows the role of the journalists in fixing the mess that we’re in right now”.