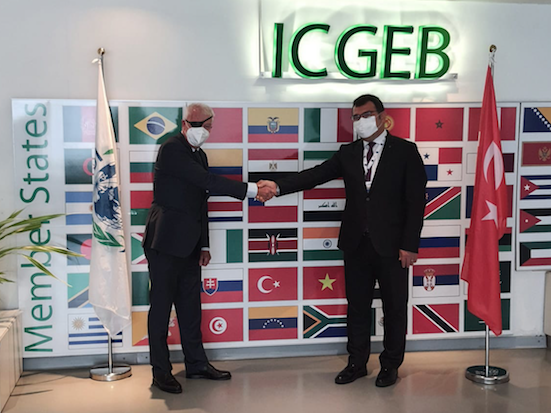 As part of the G20 Science delegation from Turkey, on Thursday the ICGEB received a visit from Prof. Hasan Mandal, President of Tubitak.

Among other constructive developments, applications from the Turkish scientific community were strongly encouraged by the ICGEB for its Fellowship Programme, and the first building blocks were set for an ICGEB Regional Research Centre to open in Turkey.

Dr. Lawrence Banks, ICGEB Director-General, discussed the many common points between ICGEB and Tubitak with the Turkish delegation: providing fellowships for researchers, funding research teams and above all, concentrating on co-creation in addition to collaboration, both national and international.

Ms. Marianna Maculan, ICGEB Chief of External Relations, expressed appreciation for the percentage of GDP which Turkey as a country invests in research. In particular, interaction to attract fellows from ICGEB Member States in other world regions was highlighted.

Prof. Hasan Mandal presented the Scientific and Technological Research Council of Turkey (Tubitak) as an entity which funds external research and performs its own research, in which more than 60% of R&D is funded by investments of private companies. A regional giant, spanning 23 research centres, Tubitak is set to open a new medical research centre this month.

The possibility of opening an ICGEB Regional Research Centre in Turkey was enthusiastically discussed and will be formalised in coming months.

As part of its Meetings and Courses Programme, the next activity which the ICGEB is set to hold in Turkey is a Course in “Cancer bioinformatics tools” in December this year.