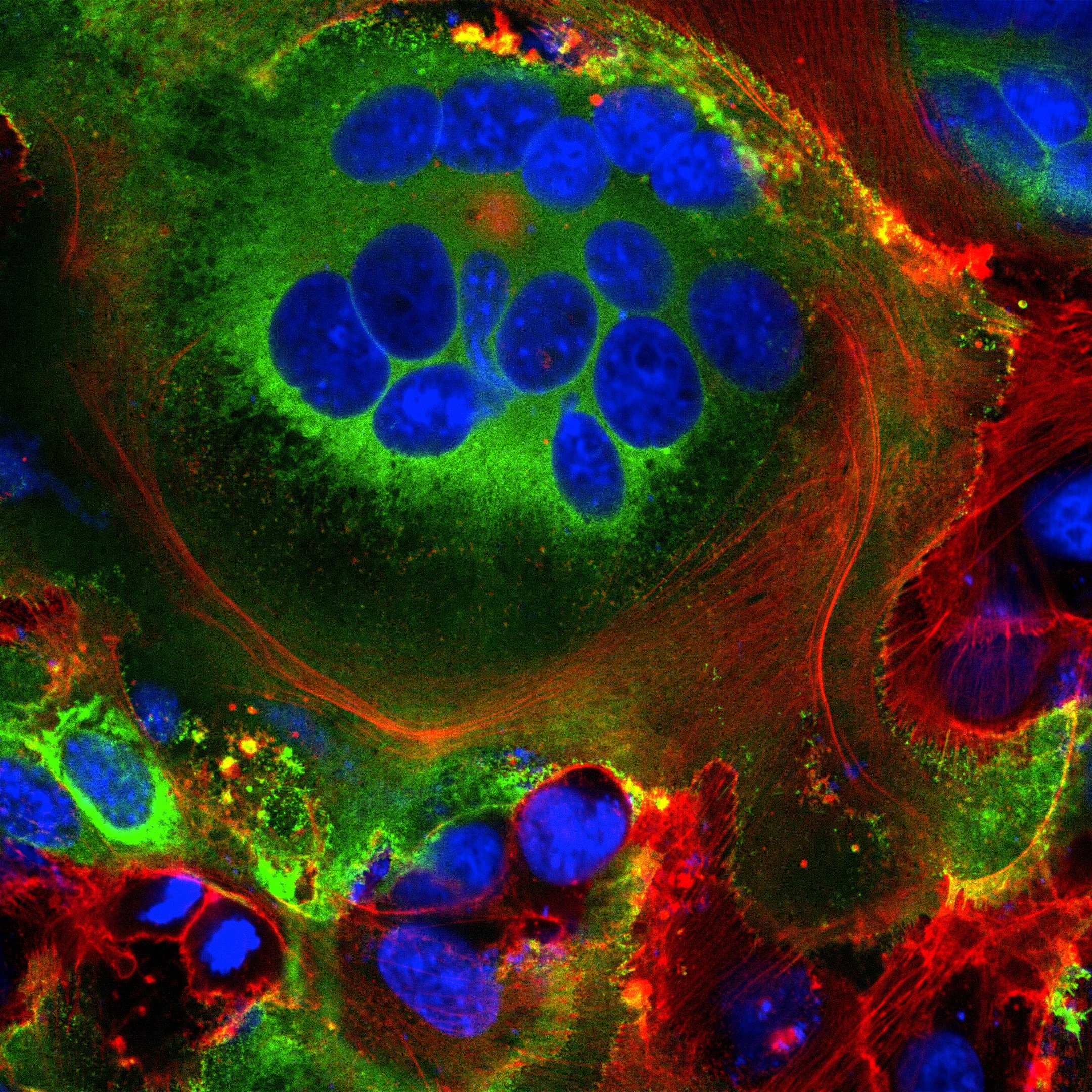 7 April 2021: Published today in Nature, Researchers in London and Trieste discover the mechanism that leads to the fusion of cells infected with Sars-Cov-2 and a drug capable of blocking this process.

Using robotic screening of over 3,000 drugs already approved for the treatment of various diseases, a group of Italian and British researchers, led by Mauro Giacca, has found that Niclosamide, a drug used for more than 50 years for intestinal infections, is able to block the harmful effects that the Spike protein of Sars-CoV-2 causes to cells. The research, conducted in the laboratories of King’s College London, ICGEB Trieste, and the University of Trieste, includes first author Luca Braga, newly appointed Group Leader of the Functional Cell Biology lab at ICGEB Trieste.

Niclosamide is a drug that was synthesized in the 1970s and has been used since 1982 for the treatment of intestinal infections due to tapeworms. The new study shows how this drug, by inhibiting TMEM16 and cell fusion, also blocks the replication of the virus. Based on these results, a clinical trial on 120 patients has already started in India, where the infection is still widespread. Niclosamide is administered to patients admitted to hospital with Covid-19.

Based on these results, a clinical trial on 120 patients has already started in India, where the infection is still widespread and niclosamide is being administered to a group of patients hospitalised with Covid-19. This is a trial that has just started, and therefore it will be of fundamental importance to wait for the results over the next few months to confirm the effectiveness of the drug.

“We are excited by our results for two reasons” states Mauro Giacca, “First, because we have discovered an entirely new mechanism, activated by the Spike protein and important to the virus. Our research shows that Spike activates a family of cell proteins, called TMEM16, which are essential for cell fusion. Second, because this mechanism is also at the basis of platelet activation, and could therefore also explain why 70% of patients with severe Covid-19 develop thrombosis. Now we know that there is at least one drug, Niclosamide, capable of blocking this mechanism.”

Luca Braga, adds “Thanks to the terrific team of scientists that contributed to this work, it has been a most exciting scientific journey. In this study we describe for the first time a new SARS-COV-2 Spike-mediated mechanism. While much still remains to be understood about this virus, this study is a great example of how the combination of Image-based screenings and innovative cell-based assays is a very effective approach in dissecting complex molecular mechanisms. I am really looking forward to using this technology to further dissect the Pathophysiology of the COVID-19 disease.”