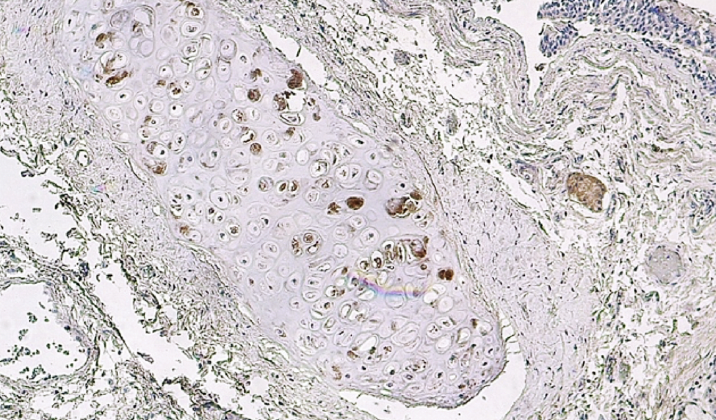 SARS-CoV2 Spike in remote districts of the respiratory system, such as cartilage

Trieste, 19 January 2023 – A study by a group of researchers from the University of Trieste, King’s College of London and the ICGEB in Trieste, published in the Journal of Pathology, has revealed unexpected aspects of lung damage caused by the Sars-CoV-2 virus.

The study, coordinated by Mauro Giacca, Professor of Molecular Biology at the University of Trieste, Director of the School of Cardiovascular Medicine at King’s College London and Group Leader of the Molecular Medicine Laboratory at ICGEB, drew on the many years of experience of Rossana Bussani of the ASUGI Institute of Pathological Anatomy, Professor of Pathological Anatomy at the University of Trieste, in the autopsy examination of patients who died at the Trieste hospital. The team of researchers, which also includes Chiara Collesi, Professor of Molecular Biology at the University of Trieste, and Serena Zacchigna, Professor of Molecular Biology at the University of Trieste and Group Leader of the Laboratory of Cardiovascular Biology at ICGEB, analysed the lung tissue of a particular category of patients, namely those who were apparently virus-negative, but whose clinical conditions progressively worsened until they led to death with symptoms entirely superimposed on those of an acute SARS-CoV-2 infection. The cohort of patients analysed, despite repeated viral negativity for up to 300 consecutive days, revealed evidence of focal or diffused interstitial pneumonia accompanied by extensive fibrotic replacement in half of the cases.
Certain pathologically significant aspects were quite unexpected: despite apparent viral remission, the pulmonary pathology turned out to be very similar to that observed in acutely infected individuals, with frequent cytologic abnormalities, syncytia, and the presence of dysmorphic features in the bronchial cartilage. The second and perhaps more disconcerting aspect is related to the absence of viral traces in the respiratory epithelium (consistent with the negativity of the molecular test), whereas Spike and viral Nucleocapsid proteins, which are essential for infection and virus replication, respectively, were detected in the bronchial cartilage and parabronchial glandular epithelium. The cartilaginous district appears to be a “sanctuary” that makes the virus unidentifiable by any of the currently available methods.
Together, these findings indicate that the SARS-CoV-2 infection may persist significantly longer than suggested by negative PCR Test results, with clear signs of infection in specific cell types in the lungs. It remains to be understood what the actual role of this latent long-term infection is in the clinical picture of the so-called “long COVID syndrome”.