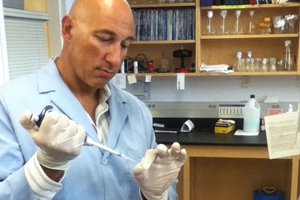 “I stepped inside the ICGEB in Trieste for the first time in 1991; an undergraduate student, with no research experience, looking for a laboratory that would guide me in a small thesis project, which I needed to graduate. It never occurred to me then that the ICGEB would become my home for the next five years.”

We are delighted to present the ICGEB Alumni Ambassador of the month: Prof. Massimo Caputi, now Full Professor at the Florida Atlantic University School of Medicine in Boca Raton. Writing to us from Florida he recounts his passion for science and research that fuelled his career and the pursuit of scientific excellence and international mobility.

After working in Dr. Mauro Giacca’s laboratory a few months, I joined the newly formed Pathology Group run by the Director of the Trieste Component, at that time, Dr. Francisco Baralle. For the subsequent five years I was exposed to people of various backgrounds and cultures, outstanding teachers, and inspiring scientists. I built friendships that last to this day and found mentors that fostered my love for science.

Thanks to my initial work, aimed at understanding the basic mechanisms or RNA splicing utilizing the fibronectin gene as a model, I attained a Bachelor’s Degree in Molecular Biology from the University of Trieste in 1992 and, in 1996, a Ph.D. in Molecular Genetics from the International School for Advanced Science.

In the spring of 1996, I moved to the United States and continued my career as a post-doctoral fellow at the University of California, Santa Cruz.  There, I was immersed in an extremely active research environment that allowed me to explore new ideas and subjects and exposed me to cutting edge research in the new field of genomics. In 1997 I was awarded the Human Frontier Science Program fellowship and I began characterizing the key RNA sequences and the cellular proteins that modulate the alternative splicing of the HIV-1 messenger RNA.

In 2001, I moved to Johns Hopkins University in Baltimore, Maryland, where I held the position of Research Scientist and lecturer. I continued my work on HIV-1, securing my first grant from the National Institute of Health, and I expanded my research program to include genetic diseases such as Marfan Syndrome.

In 2003, I was hired as an Assistant Professor at Florida Atlantic University School of Medicine in Boca Raton, Florida, where, in 2007, I obtained tenure as an Associate Professor and in 2017, I became a Full Professor.

I currently run an active research lab, which focuses on the study of the mechanisms regulating the expression of cellular and viral genes. Recent work is aimed at characterizing the role played by multiple RNA binding proteins on cellular gene transcription, T cell development, and cancer. I also lead and participate in several collaborative projects aimed at the development of microfluidic diagnostic devices for the detection of multiple viral species (Dengue, Zika, Yellow Fever, HCV, HIV, SARS-CoV-2).

In addition, since the early stages of the SARS-CoV-2 pandemic, we have established a molecular testing protocol to detect viral RNA from saliva samples and have been involved in surveillance projects to monitor the medical staff at local hospitals.

An extraordinarily committed scientist, we are proud to have him join us as an Ambassador for the Alumni Association.