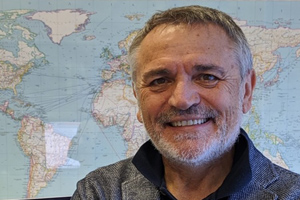 Prof. Giannino Del Sal is Group Leader of the Laboratory of Cancer Cell Signalling at the ICGEB in Trieste, Professor at the University of Trieste, and heads the research programme on "Signaling, tumour microenvironment and cellular metabolism" at IFOM Milan.

No newcomer to the ICGEB, Giannino Del Sal studied biology at the University of Trieste and had his research training at the International Centre for Genetic Engineering and Biotechnology in Trieste, at the European Molecular Biology Laboratory (EMBL) in Heidelberg (Germany) working with Claudio Schneider, and at LNCIB in Trieste where, from 1996 he was Head of the Molecular Oncology Unit. Running a research program at the IFOM (FIRC Institute of Molecular Oncology), Milan, Italy he has also worked as a visiting scientist in the Laboratory of Cell Biology of the US biotech company Mitotix Inc. in Cambridge, Massachussets. In 2001 he was appointed by the University of Trieste as full professor in Applied Biology.

Since the beginning of his scientific career, his research has been mainly focused on tumour biology, embracing and integrating the study of the mechanisms of tumour suppression in health and cancer, the investigation of the role of different oncogenic pathways in cancer development and metastasis, as well as more translational activities devoted to the development of new tools for cancer therapy.

The activity of his over 15 lab members now contribute to enrich the scientific research of the ICGEB in Non-Communicable Diseases. The most recent publication by the Group, on 7 August 2020, appeared in Nature Communications in Open Access, on the expression of mutant p53 oncoproteins, and the way in which they act to enhance tumor growth and metastatic colonization.